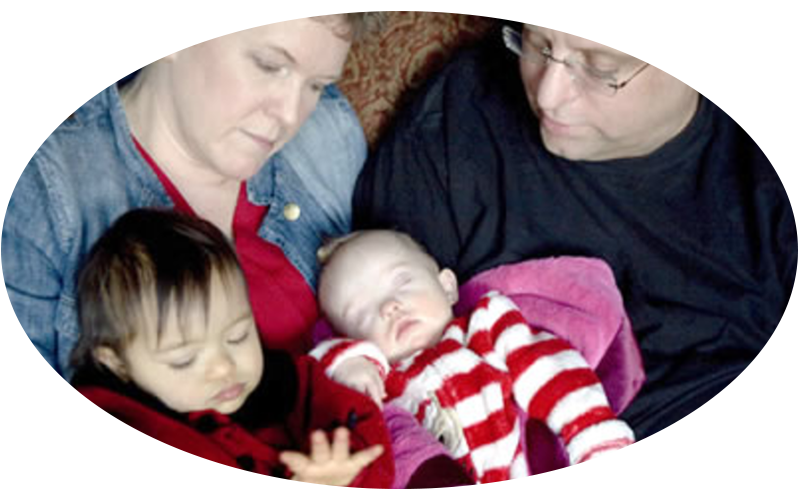 The Christmas gift arrived unexpectedly in the heat of summer when a woman in rural Washington County picked up the phone and was confronted with a choice that she knew would ultimately alter the course of a life.What if she hadn’t been home? Or had declined, saying the timing wasn’t right? Both haunting questions that get to the core of love, sacrifice and family — concepts people focus on so intently during this time of year. With one little word — “yes” — a journey began.

Though it may have started out of desperation, it ended in joy Friday afternoon (just two days before Christmas) when a family gathered in a courtroom for a simple ceremony that couldn’t begin to do justice to all that had taken transpired during the past five months.

The call came on July 13 when Sandi Brannock’s husband was at work and the couple’s six kids were busy playing in another part of the house. At her desk, she glanced at the caller identification and readCincinnati. Brannock knew only one person there. And, sure enough, when she picked up it was Robin Steele, coordinator for the National Down Syndrome Adoption Network.

Five days earlier, a mother had given birth in Washington state to twin girls. One was healthy. The other had a heart defect and Down syndrome, both a complete surprise. The parents had decided they were going to take one twin home and leave the other behind. Called boarder babies, these children become wards of the state, which places them in foster care. Steele, who 35 years ago adopted such a child, had been searching her organization’s database to find someone who might take this child.

The parents were checking out of the hospital in two days. She needed to find a family who not only had an interest in adopting a special needs child, but who had also completed a detailed home study, the first step in the adoption process. The computer came up with Sandi and Kirk Brannock. Eighteen months earlier, the couple — both 46 and married for 17 years — had adopted Amira, a two-week-old Washington baby girl who had Down syndrome. Steele had an important question for Sandi: Were they interested in adopting again? Brannock asked if any other families had expressed interest…”No”.

The circumstances touched a nerve with Brannock, a registered nurse who had worked in a hospital’s postpartum and neonatal unit before quitting to raise her children. She knew of a single mother who planned to put her unborn child up for adoption, but the adoptive family backed out when the child was born with cerebral palsy. The birth mother also walked away, and the child was institutionalized. The story hit close to home because one of the Brannocks’ sons, Cole, 12, has cerebral palsy. Brannock told Steele she had to talk with her husband, who works in the high tech field. After a quick phone conversation, she got back to Steele and said yes.

That evening, the couple gathered their five sons, ages 6 to 16. Before they had adopted Amira — who now walked around the living room during the discussion — they talked with their boys about what it would mean for their lives. Once again, they wanted their boys to weigh in.One day, when their parents were gone, the responsibility of having sisters with special needs would fall to the boys, they told them. The answer was unanimous. They were gaining another sister, one they would love as much as they loved Amira.

The next morning, the family climbed into their 10-seat bus and set out to bring another little girl home. On the way, the adoption caseworker called on a cellphone and told the Brannocks to go to the hospital where paperwork giving them legal permission to see the baby would be waiting.

They arrived at the hospital early in the evening. The boys and their sister stayed in the neonatal waiting room. Their parents were each given a wristband that read “Baby A.” On the band was the date the unnamed girl was born. Brannock studied the band, trying to remember what she’d been doing the day the girl she now considered her daughter was born. A nurse led the way to a room with a sliding glass door. She passed a crib where a healthy baby girl slept and stopped in front of a crib near the back of the room. She picked up a bundle and placed it in Sandi Brannock’s arms. Brannock scooted over so her husband could sit next to her. She pulled back the blanket to look at the little face. The baby was small and pale, more fragile than Brannock had expected, and she said a silent prayer asking for strength.

Kirk Brannock took pictures of baby on his cellphone, then went to show the kids her image. Nurses told Sandi Brannock the baby had heart problems and had undergone blood transfusions, which was why she was so pale. Brannock handed the baby back to a nurse. She said she and her husband would return Friday, and the family checked in to a nearby motel. Sandi Brannock didn’t want this newborn girl to leave the hospital without a name. She researched names online, studyingthe meaning of each one. None felt right.

Then she found Elyana — God has answers.

The next morning, the Brannocks drove to the adoption agency to complete the paperwork and to meet the parents who decided to give up one of their daughters. At 11:30 a.m., the parents walked into the room with Elyana’s sister in a baby carrier. Sandi Brannock expected a drug-addicted mother, or maybe a young girl. Instead, she found an attractive couple who appeared to be at least middle class. The parents were too nervous to sit, and they stood in the middle of the room. At one point, Brannock studied Elyana’s sister. She saw the clear resemblance between the two girls, save for the distinctive facial features that indicated Down syndrome. The couple told the Brannocks they had a 3-year-old son who knew his mother had given birth to twins. The parents said they planned to tell him one of his sisters had gone to live with a family who would care for her.

As gently as possible, Kirk Brannock asked why they’d decided to give up one daughter. When the Brannocks had decided to adopt Amira, some people couldn’t understand why. Even though it felt right to them, they approached it analytically, listing the pros and cons. The only “con” was fear. And that was not enough to stop them from going ahead.

Fighting tears, the woman said she and her husband were their parents’ only children. They had no family in the area to help them raise a special-needs child. They both had demanding careers. They said they wanted the baby girl to live with a family who could do a better job than they could. The birth mother, clearly hurting, began crying. She said she loved the little girl.

The Brannocks would never judge this woman and her husband, a couple so full of fear and doubt. Better than anyone else, they knew what they were going through and would never want them to feel guilty. A little baby — made the way Sandi believes God intended her — would soon be joining a family eagerly awaitng her arrival. But it was impossible to say it just then. All the Brannocks could do was wrap their arms around this couple and hug them tightly.

When the meeting ended,the Brannocks returned to the hospital, where they filled out more paperwork and scheduled appointments in Portland with a pediatrician and a heart specialist. Then they carried Elyana Brannock to meet her brothers and sister. Elyana was so small and fragile that doctors had to wait three months before she’d gained enough weight to fix the hole in her heart. She was eventually released from the hospital and sent home, but the recovery took more than a month. It wasn’t until late November that their little girl was clearly healing.

A date — what the family called “the day” — was set to make the adoption official.

Two days before Christmas they all gathered in the Washington County Courthouse, waiting to be brought in to a courtroom where Circuit Court Judge Rita Batz Cobb would sign the adoption papers. All the Brannock kids, their parents, grandparents and family friends packed the hallway, waiting for the signal that it was time. He reached for his cellphone, tapped the picture icon up popped a photo of Elyana. “The rough patch in her life is over,” Brannock said. “She smiled for the first time two days ago. We got it on film.”

Original story can be found here